Amref Health Africa has long recognised the value and pivotal role of Community Health Workers (CHWs) in creating lasting health change in Africa by supporting the delivery of primary health care services. CHWs provide health education and referrals for a wide range of services, and provide communities, families and individuals information on and access to preventive health measures.

By identifying community members in need of care, thereby promoting early initiation of treatment, preventing or delaying the emergence of drug-resistant diseases, and ensuring adherence to treatment, CHWs play a crucial role in the attainment of universal health coverage.

In Kenya, Amref continues to work in close partnership with local communities and the role of the CHW has been instrumental in promoting and creating lasting health change.

Through the the support of the Global Fund to fight AIDS, Tuberculosis and Malaria (GFATM), Amref Health Africa works with community-based organisations and CHWs to find people in the community affected by malaria and TB. CHWs are identified and trained to conduct community TB activities, and work with health facilities to identify households to be visited for tracing of TB contacts and follow up of treatment interrupters.

At the household, CHWs conduct health education, basic TB screening, and refer those with TB symptoms and children under the age of five years in contact with people with TB for preventive therapy.

Chebet Naomey, 24, is a Community Health Worker (CHW) linked to the TB Clinic at Sigor Sub-County Hospital, in West Pokot. Every morning, on a normal week day, she wakes up at 5.00am to prepare her two children for school before leaving the house for work.

Her first point of call is the Sigor Sub-County Hospital where she starts her duties by getting briefs from the community health extension worker (CHEW) based at the facility’s ‘TB Manyatta.’

Built to look like a traditional Manyatta, the TB Manyatta is used to house and make TB patients feel at home while undergoing TB treatment instead of a TB ward as is common in many health facilities.

Chebet then checks records to identify cases of interrupted TB treatment for follow up (defaulter tracing). She also picks up cases for contact tracing.

“After this, I set off to the villages and households of the patients to check if there are family members exhibiting TB symptoms. I refer those who exhibit such symptoms for screening and diagnosis,” Chebet explains.

Chebet started working when there were only 30 registered TB patients at the’ TB Manyatta.’ But by the close of 2017, she had helped identify 40 new TB cases.

Through the Amref Health Africa Global Fund TB project and in close partnership with the Ministry of Health’s National TB program and project sub-recipients, 13,060 treatment interrupters had been traced and over 50% of them returned to treatment by the end of 2017.

The costs of accessing malaria diagnosis and treatment services have largely reduced in the malaria endemic Lake Counties since CHWs started offering services in the communities.

Kenya ranks fifth in a list of countries that are estimated to account for 90 per cent of malaria cases in the African region with levels of endemicity varying from region to region, with diversity in risk, largely driven by altitude, rainfall patterns and temperature.

The early detection and treatment of uncomplicated malaria cases in the community by CHWs, has contributed to reducing the burden of malaria cases from health facilities. 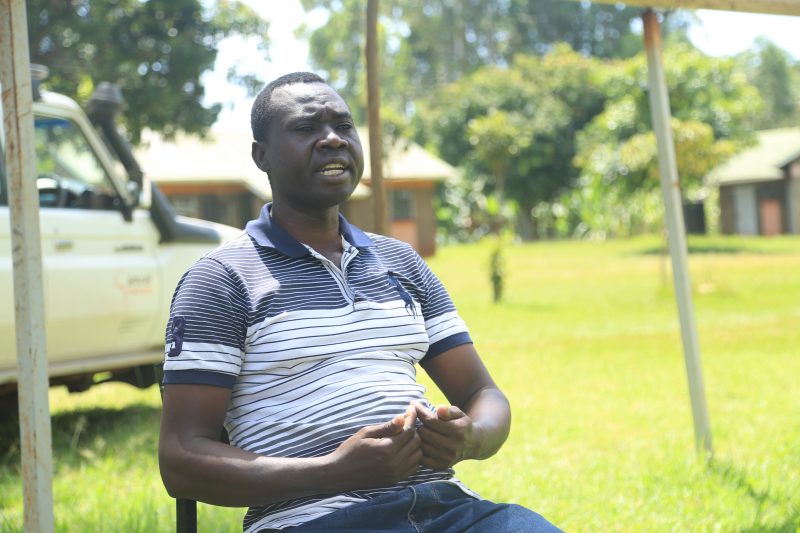 “By CHWs being able to manage malaria cases at the community unit level, the workload in the facilities has reduced thus giving the facility staff ample time to handle

the referral cases brought to them effectively. The impact of this has been immense and the community has owned it for the benefits it has brought.

Notably, behaviour changes have been impressive thanks to the initiative of our partners through the CHWs. These include sleeping under treated mosquito nets where utilisation has increased from 40% to 80%.” Zaddock Miheso, Sub County Malaria Control Coordinator, Emuhaya Sub-county, Kakamega County.

In Busia County, CHWs like Mary Kakita are championing the use of improved sanitation facilities to reduce the incidence of diseases.

Mary is in charge of 53 households.

“My role as a CHW is to share sanitation promotional messages and raise awareness on the importance of having a latrine and also ensure fellow community members construct facilities using a latrine model that is long lasting and uses locally available materials.

Every time I visit households, I share the knowledge I received during my trainings with Amref. It has empowered me to help my people,” she says.

“Before many households had latrines, there were many cases of diarrheal diseases. CHWs had a lot of work to promote behaviour change especially in hand-washing and owning a toilet. People defecated in the open and there were lots of diseases. The situation was bad; water was contaminated,” says Mary.

The efforts of CHWs like Mary and others working with Amref Health Africa in Kenya’s Financial Inclusion Improves Sanitation and Health in Kenya (FINISH INK) project are beginning to bear fruit. Analysis of clinical data shows a 12% reduction of diarrheal diseases among children under the age of five.

Across its various programmes, Amref Health Africa works with over 13,000 community health workers across the country.

For the critical role they continue to play, Amref Health Africa continues to advocate for the integration of CHWs into the health workforce, and that they are compensated for their efforts in complementing the work of health professionals, as well as receive continued support and supervision by mid-level health workers in health facilities.

How Amref Health Africa worked with partners to...

Turkana adopts the latest technology in the TB...