Ensuring Safe Sanitation for all When Nature Calls: What is Needed by 2030?

Today the world celebrates the World Toilet Day whose theme is ‘’when nature calls’’- a metaphor which represents the call of nature that every person alive has to respond to – defecation.  The United Nations dedicated this day to encourage behavior change and the implementation of policies to increase access to sanitation for all with particular emphasis on ending open defecation.

After the horrific cholera epidemics of 1849 and 1854, Henry Moule, an English clergyman and other inventors, scientist and public health officials dedicated their lives to improving public sanitation. Moule invented dry earth toilets which together with other systems have come into widespread use across the world. Unfortunately, to date about, 2.3 billion people globally do not have access to improved sanitation of which 892 million practice open defecation.

Zooming into Kenya, only a paltry 30% of the total population has access to sanitation while 12% mostly rural populations, practice open defecation. Unfortunately, lack of toilets has direct links to loss of lives due to sanitation-related ailments with an estimated 90 newborn mortalities every passing day. Reports shows that about 17,000 children under the age of five are lost due to poor sanitation, majority (90%) succumbing to diarrhea. In economic terms, it is estimated that Kenya loses 27 billion shillings annually due to poor sanitation.

Success accrued in Kenya in promotion of sanitation

Responsive interventions and investments in sanitation by both National and County governments through donor-funded programs have contributed to the formulation of the open defecation roadmap. This has been of immense significance to populations in open defecation free (ODF) zones. As at 2017, 15 counties had ODF rates above 40% with the overall national ODF rate at 14%.

National sanitation programmes have catalysed legislative action including adoption of relevant policies. The Kenya Environmental Sanitation Hygiene policy, for instance aspires to achieve and sustain universal access to improved sanitation for all Kenyans by 2030. In November 2015, Busia County set good precedence for other counties in the quest for an open defecation free country, a success that has been replicated in Siaya and Kitui Counties. The wheel has to keep rolling, calling on collaborative effort bearing in mind that even beyond the ODF milestone lies a tussle to sustain the ODF status amidst poverty among affected communities. In Busia County, a financial inclusion approach targeting the rural-financially excluded communities has provided a means to an end. Through multiple financing options coupled with a strengthened supply side, over 6,000 household have upgraded to better sanitation facilities. 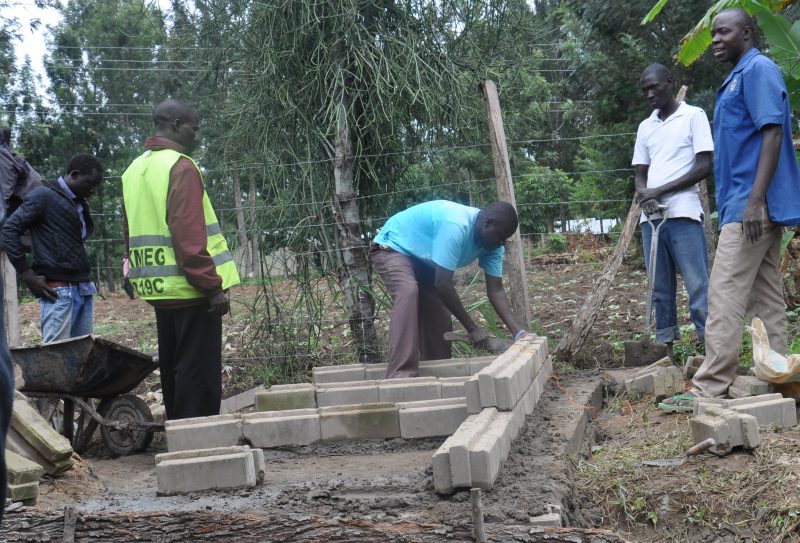 Sanitation for all by 2030 calls for innovative interventions and models that disrupt the dominant inhibitors of access, majorly sanitation financing. One such tested and proved model in India is  Financial Inclusion improves Sanitation and Health (FINISH) initiative rolled out in 2009 and later replicated in Kenya in 2013. As a partnership approach, FINISH responds to community sanitation challenges through public-private collaborative efforts between government, local financing institutions, non-governmental organisations and businesses. Under the initiative, financial institutions develop and market financial products for sanitation effectively addressing demand by governments and non-governmental organisations enabling target households to acquire affordable products and services developed and offered by businesses.

Demonstrable results show that leveraging on private funding, public-private collaboration has improved access to sanitation for over 3.5 million beneficiaries in India and Kenya building 730,000 toilets while at the same time creating employment opportunities. Based on these successes, the focus in the coming years is on expanding access excluded communities in far-flung counties and other nations.

What is needed towards the year 2030?

The ultimate goal is to have an open defecation free (ODF) Kenya with universal access to improved sanitation by 2030. This calls for formulation of strategies anchored on proven models. To accelerate sanitation for all, there is need for a purposeful focus on one- and two-way integration of sanitation into health and non-health sectors. Programming of sanitation interventions should encourage public-private partnership (PPP) models and capacity strengthening for various stakeholders to implement full-fledge PPP models in sanitation. Proven models such as FINISH that are anchored on sustainable financing for leveraged on private funding should be replicated and expanded to cover all affected counties. Core to the dynamic interventions will be strengthening government systems to provide enabling legal and regulatory environment for sanitation, to oversight and drive a nationwide agenda.

Lastly, Kenya needs to harness political and religious championship as a driver towards accelerated attainment of improved sanitation. Our Country should take lessons from India’s Swachh Bharat Mission (SBM) led by the Prime Minister Narendra Modi. This Mission seeks to end open defecation in India by ensuring every households and persons have access to a toilet by the year 2019. The campaign has yielded remarkable results so far with sanitation densities rapidly increasing from 40% to over 90% in a period of four years.