Paris is a New York-bred Congolese rapper signed to Jay-Z’s Roc Nation music powerhouse. His sound is a mix of hip-hop and African music, with a signature face painted look that has formed his identity.

“Every single moment of my trip with Amref Health Africa in Kenya provided much needed knowledge on the culture, perspective and energy,” said Paris.

During his two-day engagement with Amref Health Africa in Kenya in July 2018, he visited the Amref Kibera Community Health Centre where he saw the range of health services offered and the impact of the health facility among the population of one of Africa’s largest informal settlements.

In Kibera, Paris came to terms with the difficult living conditions as he walked through the sprawling settlement characterised by semi-permanent mud houses, open sewers and sinking toilets.

“It is heart-breaking to see that this type of living conditions still exist. Lack of sanitation is a serious issue in the slum and this is felt at the health facility,” Paris said.

The artist also visited the Amref Child Protection and Development Centre in Dagoretti which is the base of a non-residential, community-based programme focusing on vulnerable children, including those in contact with -or living on the streets of Dagoretti.

At the Centre, Paris spent time with the children, hearing their stories and seeing how Amref supports them by providing a platform for talent development and recreational activities including music, dance, drama and film. Paris performed a couple of his songs while the children danced gracefully, others presenting their original raps.

“My time with the children was very enjoyable. They are full of talent and energy, and they are not shy to show it,” he said.

He concluded his trip with a visit to the Amref Kajiado Integrated Alternative Rite of Passage/Water, Sanitation and Hygiene (ARP/WASH) project. The artist’s dream of face-to-face interaction with the Maasai community came true on this trip.

“When we were young, we used to watch the Maasai on TV. I am humbled to finally meet them,” he said.

Paris had the opportunity to see a sand dam constructed at Shukaa village in Kajiado through the ARP/WASH project that has provided access to clean and safe water, reducing the amount of time that Maasai women and girls spend in search of water, allowing them to have time for other activities. Many young Maasai girls in this area were susceptible to rape during the search for water about ten kilometres away.

The community confirmed to Paris that they have abandoned the harmful cultural practice of female genital mutilation (FGM) and instead embrace the Alternative Rite of Passage initiated by Amref. The project works with communities educating them on the harmful effects of FGM and child marriage, gender equality, as well as the empowerment of girls and women. 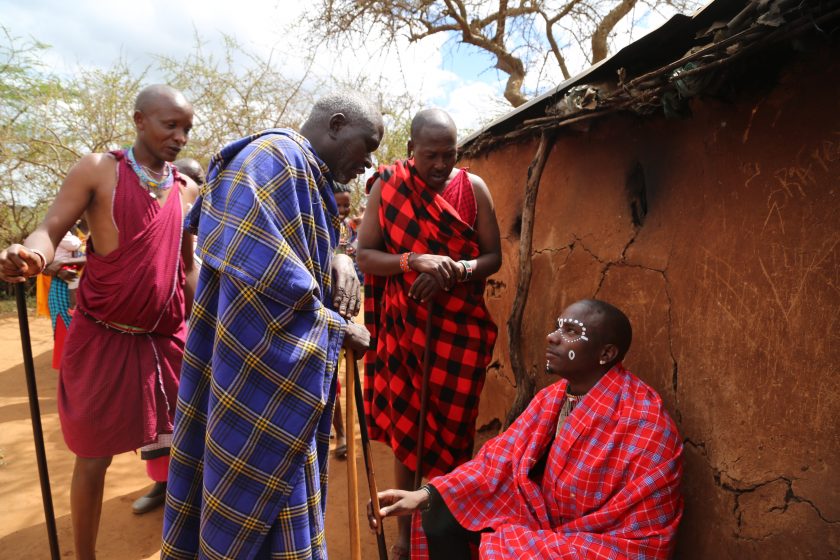 The Maasai elders performed a spiritual blessing ritual for Young Paris. The blessing procession started with song and dance, then the elders surrounded Paris with each of them wishing him good luck and prosperity. The blessing was a life-changing milestone for Paris, which he described as humbling.

“This organisation does amazing work in Kenya; it reaches people in the most remote and vulnerable areas. The culture, colour, the breath-taking landscape and spirit of the Maasai will remain in my heart,” he said.

“I am thankful that Amref gave me this opportunity to visit its projects,” he said as he described his trip as both amazing and full of adventure.

On 24 July, Young Paris will raise awareness and funds for Amref Health Africa at a benefit concert in Brooklyn, New York alongside other artists.