287 Girls Graduate from Childhood to Womanhood without ‘The Cut’

It is ‘cutting season.’

A few years ago at this time of the year, thousands of girls in Rombo Ward, Oloitokitok, Kajiado County would face the circumciser’s knife.

Today, communities in Oloitokitok are slowly embracing Alternative Rite of Passage (ARP) for girls, a ceremony that replaces and Female Genital Mutilation/Cutting (FGM/C) and girls transition into womanhood without being circumcised.

After finishing a three-day ARP training programme where they were taught about reproductive health, child rights, harmful and good cultural practises among the Maasai community, 287 girls between the ages nine and 16 years proudly graduated at Olmapinu Primary School in Rombo Village on Saturday, December 1.

The elders who are custodians of culture and traditions blessed the girls and declared their commitment to protect them against the deeply rooted harmful cultural practise.

Sixty year old Chief Moran Martine Leshinka who heads Rombo village elders is a dedicated elder whose mission is to convince all Maasai elders to advocate against FGM/C.

“Given how some elders still believe in FGM/C, it has been hard to convince some of them to stop the practise. However, we have come a long way. Today, a number of elders have changed their minds and are now against FGM. As elders, we have set our own target to end FGM in our community by 2020,” said Mr Leshinka.

The young Maasai men (Morans) who marry the circumcised girls were also at the ceremony to publicly vow to support girls against FGM in the community. They pledged to stop FGM, protect young girls who are at risk of going through the harmful practise and not refuse to marry the uncut girls. 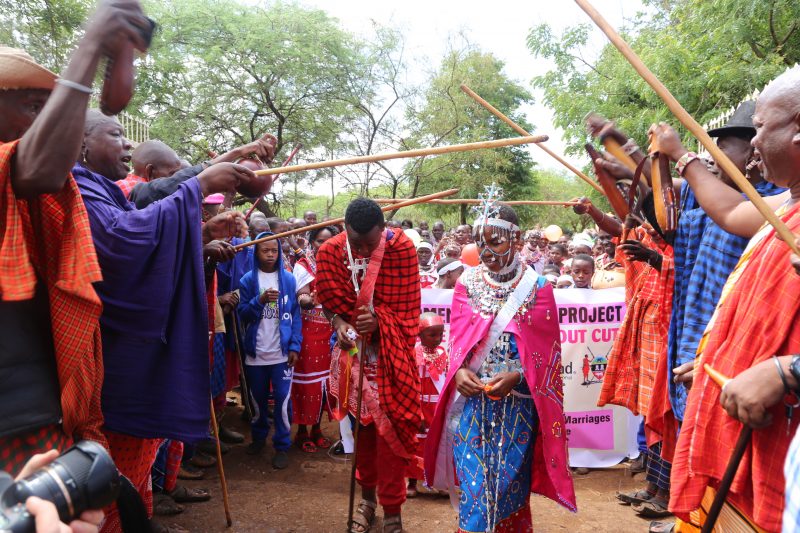 On the day of her graduation, 14 year old Damaris Siyangoi, a class seven pupil at Soit Primary school says she is excited and happy to be a woman without the cut. She has two sisters who were all circumcised and married off immediately. They were not lucky to finish school.

Damaris said the series of ARP trainings she has participated in since the age of nine years have helped her understand her rights and why FGM/C is dangerous.

“I warned my parents not to plan any FGM/C ceremony for me because I could report them to the chief. My bravery made them respect my decision. I have no fear to tell my friends who are at risk of going through the cut that it is their right to refuse the harmful tradition.”

“I feel empowered to confidently raise awareness and educate people about the real dangers of FGM in my community.”

The ARP ceremony was organised by Enduet Women group with support from Amref Health Africa in Kenya through the Alternative Rite of Passage and Water, Sanitation and Hygiene (ARPWASH) project, Child Fund, the Anti-FGM board and the County Government of Kajiado. The group led by its Chairlady Mrs Anastacia Mashindana is a community-based organisation in Rombo that works to eradicate FGM, fight for the rights of children and an end to child marriages. 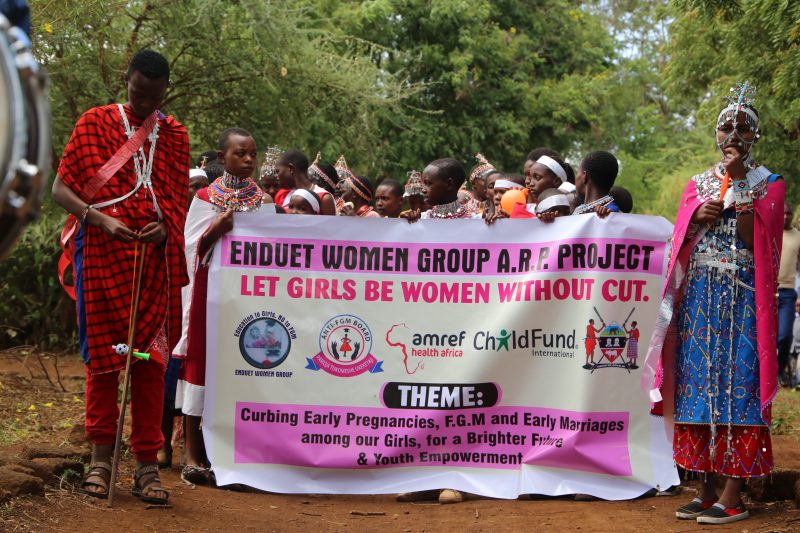 The colourful event was attended by the Director of Amref Health Africa in Germany, the First Lady of Kajiado County, Amref Health Africa in Kenya ARP/WASH project Manager Mr Lugayo Denge and various county and community leaders. The event also saw the participation of the wider population, Chiefs , leaders of the nyumba kumi and elders.

ARPWASH project is a three-year project designed to improve Sexual Reproductive Health Services and Rights (SRHR) among adolescent girls and women of reproductive age in Kajiado County through integrated ARP and WASH interventions.

The project integrates ARP and WASH by addressing WASH as a priority and entry point for FGM/C, menstrual hygiene management, school drop outs, early child and forced marriage as well as teenage pregnancy.

The project has so far trained:

Course for health journalists to kick off in February 2019

It is time to change the FGM story

Amref Joins the Governing Board for the new...

Lessons learnt from Covid collaboration across Africa are...

Stop and reverse the decline in immunization for...